Clemson animation projects, Flap! and Save Our Bees, were screened at the Reedy River Film Festival in Greenville, SC.  Flap! won the Best Animation award. 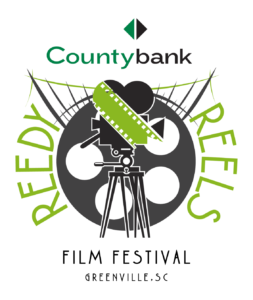 The song is a traditional song which I arranged, performed guitar, vocals, and back up.  Richard P. Elliott did the lead guitar and Greg Barfield did the back up vocals, jug, spoon and other stuff.

Russian Premiere at the Eco Cup in late Feb

Bee’s will be having its European premiere at the Green Film Fest in Belgrade!

Bee’s screening in NYC at the Brooklyn Museum of Art, for the Animation Block Party Festival!

This is clip from an animation that will be part of the save the bee campaign.  I plan on developing a series of shorts, games and other media to help promote the value and preservation of such an important critter in our ecosystem.  I hope to inspire and help educate our next generation in helping to create a healthy and vibrant world that can sustain all forms of life.

My film had it’s international premiere at the Haida Gwaii Film Festival this March at the Haida Queen Charlotte Skidegate Island located in the British Columbia Archipelago.  I am quite honored to have a film world premiere at a First Nations screening.  I lived in the Pacific Northwest for some time and have a strong connection to the environment.  So I am very pleased to have had the film screened in such a wonderful place.  I hope to return at one point and partake in this great festival.

In addition to the B.C. screening, the Toronto Short Film Festival screened the film March 20th at the Carleton Theatre next the Maple Leaf Gardens in Downtown Toronto…

Lake Ouentironk, Huron Wyandot for ‘Beautiful Waters’, or Lake Simcoe as it is know today, is a large fresh water lake north of Toronto, Ontario.  This film explores the lake in it’s natural habitat before Samuel de Champlain visited the area over 400 years ago.  Lake Ouentrionk is an animated landscape that incorporates traditional water color painting to create a vibrant and moving picture to capture the various seasons as well as the fluid changes of water, land and sky of this wonderful area. 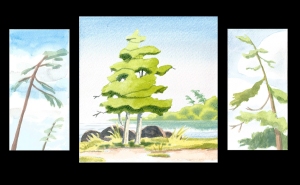 Save Our Bees in the class room

The film was part of an art class project based on the important role bees play in our ecosystem.

This is an animated video I did as part of CNN’s 12 days of Christmas.  I hope you enjoy it as much as I did making it.  For some reason, animation and holidays go together pretty naturally.  Maybe because there are not too many partridges in pear trees in the real world.  My colleague Bruno DeGazio did the music and we both sang (very badly) in his recording studio.

Obama and Putin, one on one

This is a premiere film festival in the southeastern US and I am excited to be part of the festival since it is a perfect venue for my film as it is based conceptually in this region.

Kickin’ Mule had its premiere at the St. Louis International Film Festival at the Tivoli Theatre in November.

This is a shot from an animation film that celebrates the old time music of Frank Lee and Adam Tanner.  I was inspired by cutout silhouette animation and the quilt tradition of the Appalachian region.  Frank and Adam have several other traditional fiddle and banjo tunes that I would like to further explore with other animation methods, traditional and modern.

A highlight of my independent work…

Here are some of the highlights:

This is from my ipad sketch series where I go out and draw on location.  Sketchbook Pro is an app for the ipad where now you can record the process which is something I find very useful in teaching others and also in documenting my technique.  As a film maker and landscape artist I find that I bridge two distinct skills but I hope to navigate through both as I truly enjoy both.

These are a few clips of animation that I did way back in 1996 for Disney Interactive and their Interactive CD-ROM title “the Lion King”.

Donar Films
Create a free website or blog at WordPress.com.